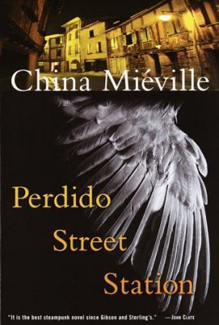 ...this great wen, this dusty city dreamed up in bone and brick, a conspiracy of industry and violence, steeped in history and battened-down power, this badland beyond my ken.
New Crobuzon.
Advertisement:

In the world of Bas Lag, on the western coast of the continent of Rohagi, is the city-state of New Crobuzon, a sprawling but thoroughly corrupt and dilapidated metropolis. Rogue scientist Isaac Dan der Grimnebulin is commissioned by a wingless bird-man to return his ability to fly. Isaac's artist girlfriend Lin, who has a beetle for a head, is commissioned by a crime lord to create a very special sculpture. Naturally, it all goes to hell.

China Miéville's sprawling monster-hunt begins his Bas-Lag Cycle, which includes the related works The Scar and Iron Council. These books gave a name to the New Weird movement with their bizarre but well-realized setting and the multitude of strange creatures and concepts within it. Further setting it apart from most fantasy is its experimentation in tone, structure and content — often, its wandering point of view, wealth of detail in even the most seemingly irrelevant places, arcane prose, central conflict that seems to gradually accumulate from unrelated events and uncompromisingly bleak tone can make it feel more like a fantastic variation upon the Gothic epics of writers such as Victor Hugo or Mervyn Peake than a traditional fantasy novel, but Mieville insists that it is merely his take on the time-honored tradition of pulp fiction.

Compare Kraken, by the same author.