Bazaar of the Bizarre 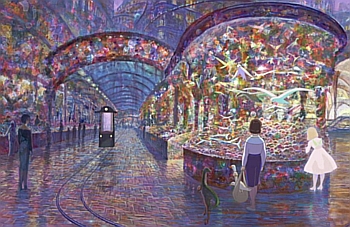 "I'm just trying to find the bathroom!"
"Hawkers in the market offered to sell me ambrosia-on-a-stick, and a new shield, and a genuine glitter-weave replica of the Golden Fleece, as seen on Hephaestus-TV."
— Percy Jackson, The Lightning Thief
Advertisement:

An exotic street bazaar from "Arabian Nights" Days, juiced up on nonsensteroids. All manner of strange, unearthly, forbidden, and fantastic items can be found in a Bazaar of the Bizarre. Usually, the rules of a Truce Zone are in effect, and sworn enemies can meet safely there (though arriving and leaving can be tricky). This may just be sacred custom or may be enforced by Functional Magic or other Applied Phlebotinum.

Often encountered by the heroes early on, to drive home the otherworldliness of a place and establish that anything can happen. If the characters are traveled enough, they may own a small version themselves as a Trophy Room. Modern-day fairy tales set in cities often feature a fairy market appearing as the Bazaar.

Roguelike computer games often feature these. On a shop level, you'll tend to find a general store (food, drink, and tools), a weapons and armaments shop, a shop that caters to the clergy (defensive and healing spells and potions, appropriate clothing, and blunt weapons), one for mages (attack spells, staves and rods, and such), and one may sell just anything, occasionally including seriously out-of-level artifacts.

Compare with the The Little Shop That Wasn't There Yesterday (when the bazaar vanishes), Museum of the Strange and Unusual, Secret Government Warehouse, Kitsch Collection, Inn Between the Worlds, Secret Shop, Black Market, Welcome to Evil Mart, World of Mysteries, Bar Full of Aliens and Heroes "R" Us. The Trope Namer is Fritz Leiber's short story "Bazaar of the Bizarre," although the 'bazaar' of that story is actually The Little Shop That Wasn't There Yesterday with a sinister twist.

Contrast with Grail in the Garbage (which might be found in the bazaar's trash heap).