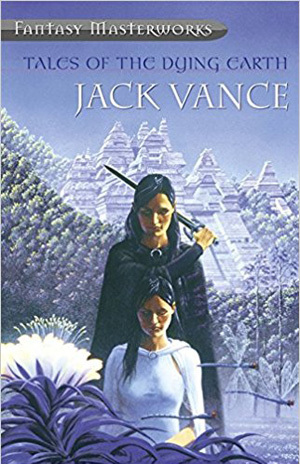 Dying Earth is a classic series of Low Fantasy novels by Jack Vance. It is considered one of the seminal works of fantasy and on Science Fantasy and has had a huge influence.
Advertisement:

Welcome to Earth, billions of years in the future. Magic has returned and has, for the most part, displaced science. The setting is both After the End and Just Before the End. Civilization has largely collapsed, and the Sun is close to going out. Earth's remaining inhabitants are generally aware of this but have no means to escape their increasingly hot and barren Crapsack World. Those that haven't become religious zealots are largely nihilistic fatalists, engaging in what debauchery they can in the time left.

The first book, The Dying Earth, consists of short stories about different characters (most notably Turjan of Miir and Mazirian the Magician). The second two books, The Eyes of the Overworld and Cugel's Saga, center on a contest of wills between Cugel the Clever and Iucounu the Laughing Magician. Thief, charlatan, con man, and whatever else he needs to be to get the most benefit with the least work, Cugel teeters on the border between Anti-Hero and Villain Protagonist. When he botches a robbery of Iucounu's mansion, the wizard teleports him across the world with a command to bring back an artifact he wants... and includes a small sentient alien creature attached to his liver and equipped with various sharp implements to encourage his compliance. The series relates his various adventures attempting to return and revenge himself on Iucounu, while conning as many people as possible out of their valuables and/or virginity along the way. The fourth book, Rhialto the Marvelous, chronicles a mystery that concerns Earth's last great conclave of magicians, who turn out to be just as self-serving and underhanded as their inferiors.

A few other authors have also contributed to the setting. Michael Shea was given permission to publish A Quest for Simbilis. This book is a direct sequel to The Eyes of the Overworld. It was later superseded by Vance's own sequel Cugel's Saga. There is also the anthology Songs of the Dying Earth, edited by Gardner Dozois and George R. R. Martin.

There is also a Tabletop RPG adaptation designed by Robin Laws and published by Pelgrane Press in 2001.