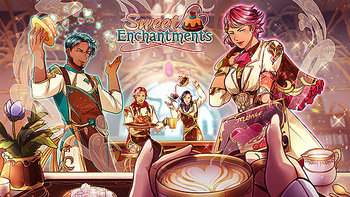 Sweet Enchantments is a Romance Game Visual Novel by Voltage Entertainment USA, released through their Lovestruck app for iOS and Android devices. It debuted as a pilot series with two love interests in September 2018, and was confirmed for full series in late November.

The protagonist, a Seattle-based food blogger, happens upon a whimsically-designed cafe she's never heard about before and makes more of a discovery than she'd bargained for: the cafe, Sweet Enchantments, serves a hidden community of magicians and magical creatures which humans are not meant to know about.

When she's found out by the cafe's staff, she has no choice but to stay on at the cafe until the government can decide how to handle the situation - whenever that might be. In the meantime, there's a whole world of magic to learn about, a cafe full of extremely attractive magicians to get closer to, and a lot of secrets to uncover.

In 2020, a pilot short set in the world, Enchanted Nights, was released, featuring a new magician heroine and two potential love interests. Both were later confirmed for full routes.