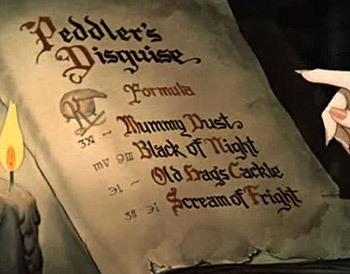 I can see how to get most of these, but mummy dust?
"They might be the colour of your hair. Or they might be all of your memories before you were three."
— "Slave Girl" describing how much her wares cost, Stardust
Advertisement:

When someone describes the constitution of an item as including things which are not actually things. Not just fictional things, like "hen teeth,"note though strictly speaking it is possible for hens to grow teeth but abstract concepts like "exuberance"

or intangible ones like "the sound of a cat's footsteps". Expect these items to be kept in jars or bottles and take the form of liquids or luminous gases.

As Applied Phlebotinum, they serve to highlight the magical skill of the one who utilizes it (face it, you have to be pretty badass to be able to capture a bear's fury in a jug, not to mention use it as alloy when forging a blade), and the inherent power and uniqueness of the end result. It also makes the recipe much harder for the viewer or reader to attempt to recreate.

Insubstantial ingredients are usually standard payment in deals with otherworldly creatures, usually the less demonic but equally devious kind who have no need for your soul. If you're looking to buy the first laugh of a child, your best bet is a Bazaar of the Bizarre, though they most probably won't take cash, so be ready to trade one day's worth of luck for it. Or just go to Neverland and start raiding fairies (Made from REAL baby first laughs!) right out of Pixie Hollow.

It also may be the secret ingredient in Grandma's Recipe: maybe "love" or "kindness" or "happy thoughts."

Be especially careful with anything Made of Evil.

Note that this relates only to the actual not-things going into the mix. Physical items with impossible flavors Taste Like Feet or Taste Like Purple.