Literature / The Long Dark Tea-Time of the Soul 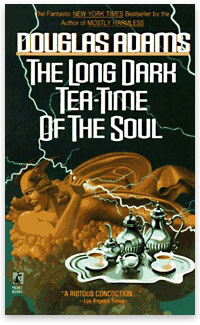 "...it was the Sunday afternoons he couldn't cope with, and that terrible listlessness which starts to set in ... as you stare at the clock the hands will move relentlessly on to four o'clock, and you will enter the long dark teatime of the soul..."
— Life, the Universe and Everything
Advertisement:

It can be seen as a comedy/mystery/science fiction.

It was adapted into a radio serial for BBC 4 in 2008. The radio series takes a few liberties, but stays mainly close to the source material and clears up a few of the more confusing plot points.

Followed by The Salmon of Doubt (unfinished).