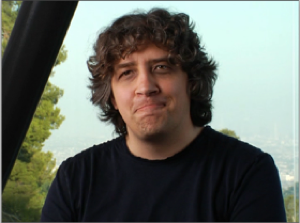 Craig Douglas McCracken (born March 31, 1971) is an American animator, responsible for the Cartoon Network cartoons, The Powerpuff Girls, as well as Foster's Home for Imaginary Friends. Born in Charleroi, Pennsylvania his family moved to Whitter, California after McCracken's father died when he was seven. He went to the California Institute of Arts, where he formed a strong friendship with Genndy Tartakovsky and Rob Renzetti. The friendship is evident in the cooperation between series. After graduating he got his start on 2 Stupid Dogs. He created a cartoon called "Whoopass Stew," and the idea eventually became The Powerpuff Girls.

There was also a short lived project on Cartoon Network he and Rob Renzetti created called Cartoonstitute, which was supposed to be a successor to the What A Cartoon! Show on TV, but it got put quietly on CN's video service instead. He left Cartoon Network in 2009, and spent the next few years as a freelancer, creating sketches for what would eventually become his next show Wander over Yonder in 2013. It ran for two seasons before it's cancelation, making it McCracken's first show to be canceled rather than voluntarily ended. His next show, Kid Cosmic, premiered on Netflix in 2021; being his first series distributed for a streaming service, and the first to fully utilize a serialized story format.

He is married to fellow animator Lauren Faust. The two met when she joined the writing staff of Powerpuff Girls in season three and have since collaborated on all of his subsequent shows. They presently have one daughter together.

He also has a Deviantart page