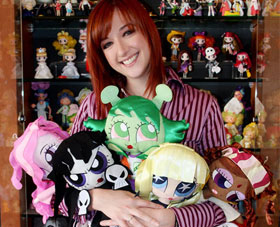 "Cartoons for girls don't have to be a puddle of smooshy, cutesy-wootsy, goody-two-shoeness. Girls like stories with real conflict; girls are smart enough to understand complex plots; girls aren't as easily frightened as everyone seems to think."
— Lauren Faust on developing My Little Pony: Friendship Is Magic
Advertisement:

Lauren Faust (born July 25, 1974) is an American animator whose projects include The Powerpuff Girls, Foster's Home for Imaginary Friends, My Little Pony: Friendship Is Magic, and DC Super Hero Girls. For a long time now, Lauren has been trying to get strong female leads for animation. She was attached to direct the forthcoming CGI feature Medusa for Sony Pictures Animation, but left the project in November 2015. She is currently working on her first novel and raising her first child.

She was born in Annapolis, Maryland and studied at the California Institute of the Arts (better known as CalArts) and decided to go into the animation industry. Lauren has been known for the preteen girls' Web site Milky Way and the Galaxy Girls, as well as being married to animator Craig McCracken. Her DeviantArt account is located here

No relation to the other Faust, although that just might offer an explanation as to how she found a way to get grown men to like ponies.

Films and other works Lauren Faust has worked on:

Tropes that apply to Lauren Faust: