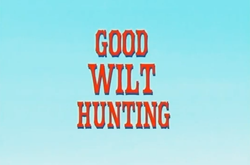 Good Wilt Hunting is the first Made-for-TV Movie for the series Foster's Home for Imaginary Friends, released at the end of the fourth season. It premiered November 23, 2006.

It's the annual Five-year Reunion at Foster's, where the imaginary friends get to see their creators again once every five years. While Mac and Bloo meet many of the creators of the friends, they wonder who Wilt's creator was. After asking Wilt a number of questions about his creator, he gets nervous and runs inside. The night of the reunion, Wilt decides to leave the house, and explains to Bloo (who followed him downstairs) that he did something terrible and needs to fix things up. Bloo (who thought that by "something terrible" meant that Wilt was a criminal) ended up telling everyone in the house the next morning, with Frankie deciding to try to find him. Coming with Frankie are Mac, Bloo, Eduardo, Officer Nina Valerosa (Eduardo's creator), Coco, and Douglas and Adam (Coco's...discoverers).

Along the way, Wilt ends up helping other people with their issues, while finding out more about himself. In this movie, we find out about his backstory. Wilt was once the imaginary friend of all-star basketball player Jordan Micheals, but after losing an important game to him, he ran away. The game also caused his injuries, with a basketball bouncing onto his eye and his arm being crushed (and most likely amputated).

It's pretty much what happens if Foster's Home for Imaginary Friends met Follow that Bird. The movie was a success, and was nominated for an Emmy (however, it lost to Where's Lazlo?)

Not to be confused with Good Will Hunting