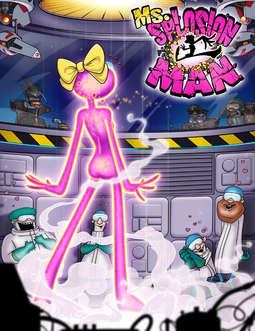 Did they have to make their explosive mutant female? The looks on their faces say "yes".
"...if it's a straight man who creates the first perfect robot-human duplicate, its gonna be a woman because I guarantee you the first thing he plans to do with it is have sex with it."
— The Spoony Experiment, "Black Hole of Board Games: Isaac Asimov's ROBOTS

In contrast, a male protagonist will get a Hot Scientist and is much more likely to get her as a love interest if either of them want the other.