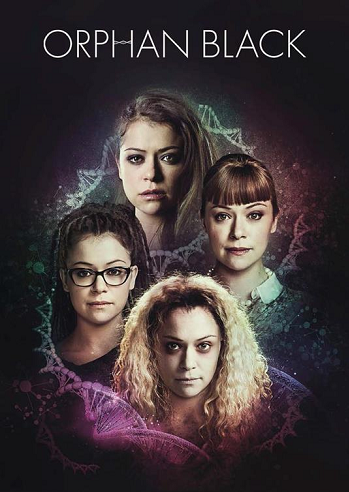 Street Smart Sarah Manning (Maslany), an English orphan fostered in Canada, is heading home when she witnesses a woman throw herself in front of a train. Reeling as the woman looked exactly the same as her, Sarah takes advantage of the resulting panic and takes the woman's discarded handbag. Examining the purse's contents, Sarah identifies the woman as Beth Childs (also Maslany) and due to their eerie resemblance, decides to assume her identity in order to rob her home and clean out her huge savings account with her foster brother, Felix (Jordan Gavaris).

Not long into her plot, however, she suddenly finds herself in too deep. Not only was the late Ms. Childs a troubled police detective with a boyfriend and plenty of secrets, but Sarah soon uncovers a huge conspiracy that changes everything: she is one in a series of clones living across the world (all of which are played by Maslany). Meeting with two of her "genetic identicals", soccer mom Alison Hendrix and biology student Cosima Niehaus (both also Maslany), Sarah learns that she and her clones are being killed off — turning what looked like an easy con into an investigation to unravel top-secret conspiracies.

Distributed internationally by BBC America, and airing in Canada on Space Channel, Orphan Black premièred in March 2013, has received widespread acclaim from viewers and critics, and even has a strong internet fandom. The season two episode "By Means Which Have Never Yet Been Tried" won a Hugo Award for Best Dramatic Presentation, Short Form. The show is especially notable for its editing and effects, which allow star Tatiana Maslany to appear as multiple characters at the same time. She was nominated for an Emmy Award for her performance in season three and four, after the lack of a nomination in the first two seasons led to widespread protest. She finally won Best Actress in a Drama Series in the 68th Primetime Emmy Awards for her work in the fourth season of the show.

Between February and August 2015, a tie-in Comic Book ran from IDW Publishing. This was followed between November 2015 and May 2016 with another limited series, "Orphan Black: Helsinki." In 2017 another series, "Orphan Black: Deviations," gave an Alternate Continuity where Sarah is able to save Beth from her suicide (short version: nowhere near as happy an outcome as you'd think).

After all five of its planned seasons, the series finale aired on August 12, 2017.

Only a few months after the show's Grand Finale, Japan announced a remake which premiered on December 2.

In 2019, an audio book continuation was announced for Serial Box, narrated by Tatiana Maslany. Later that year, the first season of ''Orphan Black the Next Chapter" was released.