Series / Only Murders in the Building 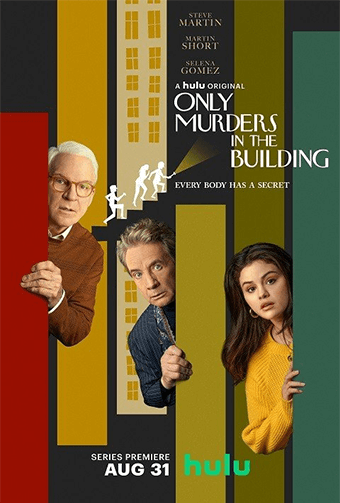 "This sends the investigation into a whole new direction."note Left to right: Charles, Oliver, and Mabel.
"Every true crime story is actually true for someone."
— Charles-Haden Savage
Advertisement:

Only Murders in the Building is a Hulu murder mystery/dramedy starring Steve Martin, Martin Short, and Selena Gomez that debuted in 2021.

Charles-Haden Savage (Martin), Oliver Putnam (Short), and Mabel Mora (Gomez) have little in common aside from the fact that they live in the same building. However, one night, they happen to bond over their shared love of True Crime podcasts. When a mysterious death in their building is ruled a suicide, the three believe that foul play is actually involved and — armed with little knowledge or experience, but plenty of enthusiasm — decide to do a little digging themselves and start up their own podcast in the process.

A second season was ordered mid-way through the first's airing and was released on June 28, 2022. Likewise, a third season

was announced midway through the second. The show airs on the Star hub outside the United States.

Warning for those who haven't seen the series yet. It is an intricate mystery and each episode has at least one major revelation that ripples across the plot. Spoilers abound on this and all related pages, so proceed with caution!

This sends the tropes in a whole new direction:

During the Summation Gathering, Charles dramatically turns around to point his finger at the supposed killer but he turns a little too much and ends up pointing at an unwitting bystander.

Example of:
Giving Someone the Pointer Finger

During the Summation Gathering, Charles dramatically turns around to point his finger at the supposed killer but he turns a little too much and ends up pointing at an unwitting bystander.