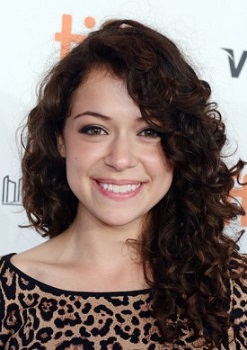 Will the real Tatiana Maslany please stand up?
Advertisement:

You may know her better for being the first (and second, and third, and fourth...) role of the scifi series Orphan Black. She also narrated David Cronenberg's Eastern Promises, played Mary in a 2010 BBC production of the Nativity and had a part in Diary of the Dead, and plays She-Hulk in the Marvel Cinematic Universe since 2022.

After three years of widely decried snubs, she won the Emmy Award for Best Lead Actress in a Drama Series for her work in season four of Orphan Black.

In 2022 she and the American actor Brendan Hanes married.