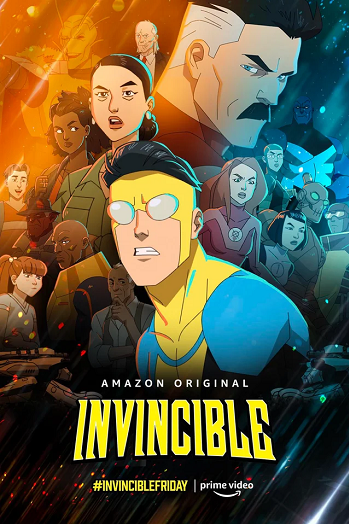 When the world lost hope, he gave them a hero.
"It's about time."
— Mark Grayson
Advertisement:

Invincible is a 2021 adult animated superhero series based on the comic series of the same name by Robert Kirkman and Cory Walker. The series is developed for Prime Video, and is a rare instance of a modern animated show utilizing the hour-long animated format.

Set in a world of superheroes, where Nolan "Omni-Man" Grayson is seen as the most powerful of all, his son Mark Grayson tries to live a life as an Ordinary High-School Student before he's drawn into the world of superheroics himself. Mark realizes that he's finally inherited his father's powers after his seventeenth birthday, and becomes the superhero Invincible as he works to master them while balancing his two lives.

However, an unthinkable tragedy soon strikes the superhero community, and Mark is forced into a dangerous position that he doesn't fully understand. With his new superhero allies, Mark quickly learns that there is much more to the world that he's inherited than meets the eye — and that there are twists and turns that will make him question the true nature of his role on the planet.

The series premiered on March 26, 2021, with its first three episodes, with subsequent episodes dropping every Friday, with an All-Star Cast of voice actors lending their talents to the series. On April 29, it was then announced that the show had been renewed for second and third seasons. Robert Kirkman has indicated that he believes that the series could have anywhere between five and seven seasons to adapt the full story from the comics.

open/close all folders
A-F
G-L
M-R
S-Z
These are the tropes. The tropes for the adaptation of... Invincible
Feedback