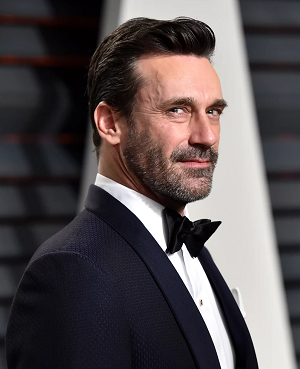 "I came in the Dawson's Creek era; it was all about tiny guys who looked like teenagers, and I haven't looked like a teenager ever. So I was, like, auditioning to be their dads. At 25."
Advertisement:

Jonathan Daniel "Jon" Hamm (born March 10, 1971 in St. Louis) is an American actor best known for his role as Don Draper on Mad Men. Since the show's premiere in 2007, he's gained additional exposure as a comic actor with roles in 30 Rock and the Kristen Wiig film Bridesmaids, as well as three Saturday Night Live hosting stints (in seasons 34, 35, and 36). Additionally, he's appeared in more dramatic roles recently, including the remake of The Day the Earth Stood Still (2008), the film based on Howl 2010, and a critically acclaimed turn in The Town. He also starred in A Young Doctor's Notebook as an older Daniel Radcliffe.

Fun fact: Hamm taught drama at his old high school, the John Burroughs School in St. Louis, for several years in the 1990s, and two of his former students are notable in their own right: Ellie Kemper, who played Erin in The Office and stars in Unbreakable Kimmy Schmidt (in which he appeared), and Beau Willimon, writer of The Ides of March and creator of the American version of House of Cards.