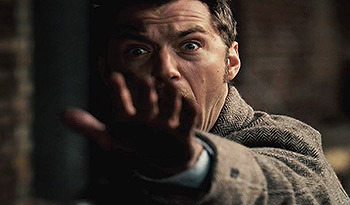 Well, when you're about to go up in a massive explosion, warning others away only works from a distance.
Advertisement:

The futile hand reach happens when one character sees another character about to be stabbed in the back/taken control of by an evil force, fall to their death, etc. They will put their hand out towards the camera/reader, even though they know it is futile. Often, they will scream the person's name and/or "NOOOOOOOOOOOOO!"

It happens quite a lot in action and sci-fi movies, though shows and movies based on comic books also seem to like this trope quite a lot. Also a common Anime Theme Song trope. It is somewhat common in a fantasy setup with magic or psychic powers to have someone perform this trope straight, only for their latent abilities to trigger and thus subvert the "futile" part.

Not to be confused with Take My Hand!, although the two could overlap. Also never a Last Grasp at Life, in which a character grasps in the air right before dying.

See also Milking the Giant Cow and Giving Someone the Pointer Finger for more examples of dramatic hand gestures.