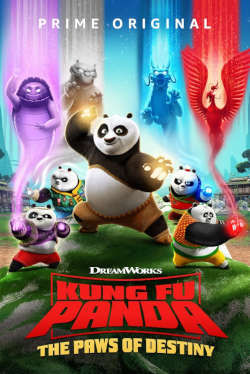 Kung Fu Panda: The Paws of Destiny is an animated television series based on the Kung Fu Panda franchise, and the second one after Kung Fu Panda: Legends of Awesomeness. The description is as follows:

"Set after the events of Kung Fu Panda 3, the series follows Po on a fresh adventure featuring four panda kids who happen upon a mystical cave beneath the Panda Village. The panda kids accidentally absorb the chi of ancient and powerful Kung Fu warriors known as the Four Constellations: White Tiger, Blue Dragon, Red Phoenix, and Black Tortoise. They realize they are now destined to save the world from an evil force, landing Po with his biggest challenge yet — teaching this ragtag band of kids how to wield their newfound Kung Fu powers."

Mick Wingert reprises his role as Po from Legends of Awesomeness, alongside franchise regular James Hong as Mister Ping. The rest of the cast includes Haley Tju as Nu Hai, Laya DeLeon Hayes as Jing, Gunnar Sizemore as Bao, Makana Say as Fan Tong, and Chrissy Metz as Mei Mei.

The first season of the series premiered on Amazon's Prime Video service on November 16, 2018. Here is the trailer.

Kung Fu Panda: The Paws of Destiny provides examples of: