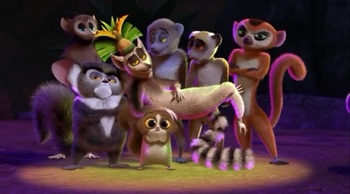 A spin-off of the Madagascar series on Netflix. This computer-animated cartoon features King Julien XIII, chronicling his life on Madagascar prior to the events of the films. Also returning are Maurice and Mort, as well as a new female lemur character named Clover.

The show debuted in December 2014 with five episodes. It is the second spinoff to circulate from Madagascar, after The Penguins of Madagascar which premiered on Nickelodeon. It is also the second film by DreamWorks Animation, after Turbo, to be given a spinoff by Netflix.

Following the events of the 4th season finale, a Sequel Series, All Hail King Julien: Exiled, premiered on May 12, 2017 taking a dramatic shift from episodic comedy to highly serialized dramatic comedy in the form of a 13 part story.

The sixth and final season overall premiered in December 1, 2017 as the 5th season of All Hail King Julien.