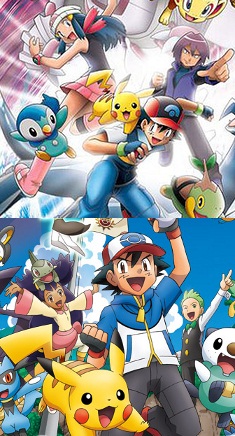 Misty and Brock left already?note Granted, the one in the upper picture on the right is anything but a "pal".
"...Yet on Primus, I too have found new brave friends, and a new family..."
— Excerpt from the Opening Narration of The New Adventures of He-Man
Advertisement:

There is this new version of an old series. You may notice from the beginning that it continues from the original work instead of being a sort of reboot. However, despite The Hero still being there, most of the supporting cast has been changed for new characters, except for one or two. Sometimes this is due to the hero having moved to a new city. Part of the new cast tend to be Expies to old characters. It could be considered a Retool.

Contrast Changing of the Guard. See also Spin-Off, where it's a secondary character being placed in a new setting instead of The Hero. If the (old) hero is traveling with a mix of both old and new party members, it's With a Friend and a Stranger. Rookie Red Ranger is a conceptual inversionnote "New Hero, Old Team" even though we may not have seen the team prior to The Hero joining.