Western Animation / Journey Back to Oz 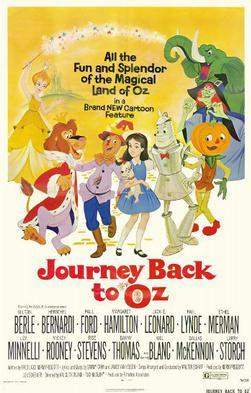 Journey Back to Oz is a 1972 (although completed in 1971, and not released in North America until 1974) Filmation feature film, meant to be the official sequel to the 1939 The Wizard of Oz. It's very, very loosely based off of L. Frank Baum's The Marvelous Land of Oz, though Baum is not given any writing credit.

After Dorothy is knocked unconscious immediately prior to a tornado, she awakens to find herself and Toto in Oz once again. After meeting Jack Pumpkinhead, she learns that the Wicked Witch, Mombi, plans to Take Over Oz by use of...green elephants. She and Jack flee Mombi's home and try to warn The Scarecrow (now the king of Oz), meeting a talking wooden horse named Woodenhead Stallion. Unfortunately, the scarecrow is captured by Mombi, along with Toto, and the trio try to seek help from the Tin Man and the Cowardly Lion, both of whom are too afraid to help them. But Glinda tells Dorothy that she can save Oz herself, with her new friends, an in-case-of-emergency silver box, and a little of her own special magic.

Compare the subsequent Filmation productions Pinocchio and the Emperor of the Night and Happily Ever After, unofficial sequels to Disney's Pinocchio and Snow White and the Seven Dwarfs respectively.