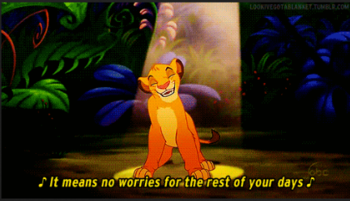 Life is good, ain't it? Makes you just want to sing about it. And if life isn't good... well, then sing about being happy, and some happiness is sure to come to you. And if you've got a friend whose life isn't as happy, well then maybe a song will perk up their day.

Some other guys can take their dark brooding, their angst, their cynicism, and their responsibilities and sit in their corner somewhere. But this song is about living the good life, the free life, the happy life. Not tied down by any restrictions, you just sing to be happy, and that's all there is to it.

Basically, this song is about having a fun-loving, optimistic outlook on the world, and, above all else, no worries. Expect this sequence to be a lot lighter in tone than the rest of the plot.

Usually, this type of song is sung by a carefree individual to educate someone who doesn't know the joy of the good life, but, since the hero's journey is ultimately all about responsibility, this tends to be a Sidekick Song, especially if the sidekick's life is a Foil to the hero's destiny, or a song sung by the hero before The Call screws around with his life. It may even represent an initial Refusal of the Call, or a "Leave Your Quest" Test later in the story.