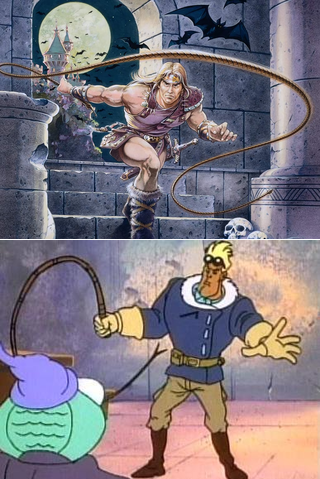 commenting on the race lifting done in Street Fighter: The Legend of Chun-Li. note For the record: Kristin Kreuk is Canadian, but she does have Chinese ancestry on her mother's side.
Advertisement:

Usually in newer versions of older media (say an NES game or horror film), a character's design is changed to the point where that character can only be recognized by minor details, or simply the name attached. This is done to modernize characters for a new generation, much like any remake or adaptation. Such changes are likely to annoy the fans, but after it releases, audiences may come to accept the newer design as better overall. Changes to old designs usually end with people getting used to them until the next change is made and the cycle starts over again.

Compare Not as You Know Them (where the appearance is the same but the personality isn't), Race Lift (a specific form of this), Adaptation Dye-Job (same), Adaptational Attractiveness (when their looks improve), Progressively Prettier (same), Fanservice Pack (same), Adaptational Ugliness (when adaptations make them look less attractive), The Nth Doctor (when there's an in-universe reason for the change), The Other Darrin (an unexplained change of actor) and Early Installment Character-Design Difference (characters whose designs looked different early on). See also They Changed It, Now It Sucks!. Can lead to Your Costume Needs Work. Also compare Off-Model, Same Character, but Different, Depending on the Artist and Unreliable Illustrator. When it happens to locations, see Chaos Architecture.