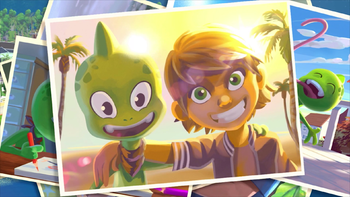 Shows me a world I never saw before.
Advertisement:

In Bones Town, a small city in the southern United States, lives the Scott family. They've become famous after adopting a small dinosaur named Denver, who they raised together with their son, Cliff. The exploring the daily life of Denver and the Dinopals: Cliff, Charlotte and Super Dan, it's always extraordinary when a dinosaur is thrown into the mix.

Where most kids dream of having a dog, a cat, or even a hamster, Cliff Scott and his family have his adopted brother — a small dinosaur named Denver! Together, Cliff, Denver, and a comedic crew of human friends including Charlotte and Super Dan make the Dinopals, and in their adventures, there’s an inevitable monkey wrench that is always in play –- Denver is a dino in a china shop! Moreover, being one-of-a-kind puts Denver on everyone’s radar.