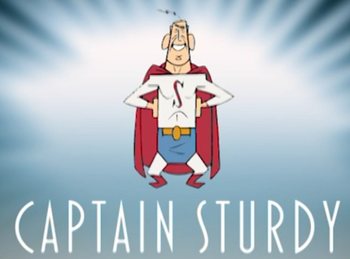 The first was titled Captain Sturdy: Back in Action and aired in 2001 as part of the What A Cartoon! Show. The pilot had Captain Sturdy having to come out of retirement because his pension has been cancelled due to the retirement age for superheroes being lifted to 70. To his dismay, he finds that today's heroes have lost sight of what being a hero truly means right when the city is being endangered by his old enemy Moid.

The second pilot was titled Captain Sturdy: The Originals and aired in 2003 on Adult Swim. This time, Captain Sturdy regrouped with several of his retired teammates to take on his old enemy Dr. Destructo.

Both pilots can be viewed on Adult Swim's website.

Tropes found in these pilots include: