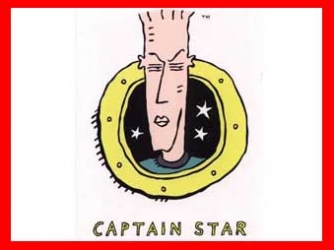 Captain Star (1997-1998) was a quirky Anglo-Canadian cartoon parody of Star Trek animated by Cosgrove Hall, which ran for only 13 episodes. Captain Star's mission is to visit exotic planets, name them after himself, and sell stuff. However his superiors have stuck him on a nameless planet at the ragged edge of the universe where he naively waits for his next orders, his ego oblivious to the implications that he has been Kicked Upstairs.
Advertisement:

The actual work is done by his second in command Dana Scully-Ersatz (just look at that hair), Only Sane Woman First Officer Scarlette. She is sort of helped by the multi-limbed, multi-headed engineer "Limbs" Jones and navigator Black, a fish-obsessed cook.

Not to be confused with the TUGS character of the same name.