Kid Hero All Grown Up 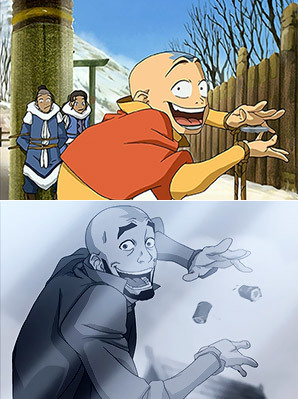 What happens to a Kid Hero after they save the world? Kid Hero All Grown Up is a common play on the Kid Hero trope, showing what happens to our hero many years later. This trope can be a permanent change, by having a Kid Hero grow up in the story, or a temporary look into the future. It can also be used as backstory by introducing an adult character and then revealing that they used to be a Kid Hero.

Some common outcomes are:

This is also common as a Back Story for the hero's mentor or parent. If the villain is revealed to be a former Kid Hero, they may also fall under Used to Be a Sweet Kid, Fallen Hero, or A Pupil of Mine Until He Turned to Evil.

See also: Former Child Star, School Yard Bully All Grown Up, Sidekick Graduations Stick, Early Personality Signs, and She Is All Grown Up. Compare A Minor Kidroduction and Retired Badass. A Prequel may show the childhood adventures of an adult character in the original, and any movie about the heroes Spin-Offspring will feature this. A Generational Saga will often feature this.