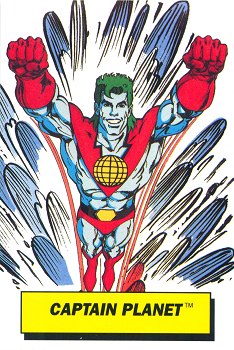 He's our hero™!
"I wonder what you're captain of..."
— Penny, Dr. Horrible's Sing-Along Blog
Advertisement:

One of the most common types of superhero names. Simply stick "Captain" in front of this hero's name, and then whatever (usually) noun the writer wants. Perhaps it's to give the impression of leadership, as though this character actually is The Captain. This character won't actually be a captain of some military group, but will often be The Good Captain.

This can even happen with villains as well, although it's rare, and often reserved for parodies.

The notoriety of this naming convention also named the tropes Captain Ethnic, Captain Geographic, Captain Patriotic, Captain Obvious (which was named outside this wiki), Captain Oblivious, Captain Ersatz, and several other members of the TV Tropes Superhero Team.

Again, this is not simply a captain of a ship or military group, although it can occasionally overlap with it when a costumed superhero holds the actual rank of captain.

Compare Something Person and Captain Space, Defender of Earth! (which this can overlap if a character is a space hero and a superhero).