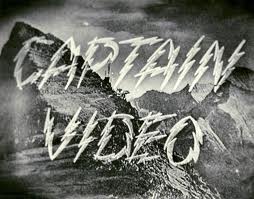 "Even outer space had maniacs. I learned this from a show called Captain Video, featuring a man named, oddly, Captain Video, a space pioneer in charge of an extremely low-budget spaceship that appeared to be made from materials that you might find around a TV studio. For example, the device he used for communicating back to the Earth was obviously a regular telephone; Captain Video held the handset as though it were a microphone and talked into the listening end."
— Dave Barry, Dave Barry Does Japan
Advertisement:

Live-action TV show (full title Captain Video and His Video Rangers) produced and aired on DuMont from 1949-55. Due to the limitations of technology at the time, Captain Video, like most shows of The '50s, was done live (i.e. what the cameras saw went out to the viewers).

The show followed the adventures of Captain Video, an agent of good who was billed at the opening of each show as the "Master of Time and Space" and an "e-lec-tronic wizard" who helped maintain peace on Earth and abroad, aided by the Video Rangers.

It was the first science-fiction TV show, something that was perpetually at odds with its strapped production budget. It's still occasionally mentioned by humor writer Dave Barry (see above), who was a huge fan as a kid, and especially loves to bring up the Captain's communicator just being a regular phone, which he attempted to disguise by talking into the listening end like a microphone. In fact, many of the Captain's things were simply whatever was handy. In The Forgotten Network, a book about DuMont, it's mentioned that the uniform Captain Video wears is modified Army surplus, and one of his weapons (a rather fearsome-looking gun) was made from a car muffler.

The list of writers for the show is pretty much a who's who of classic sci-fi: Isaac Asimov, James Blish, Arthur C. Clarke, Damon Knight, Robert Sheckley and Jack Vance are among those who wrote for the series.