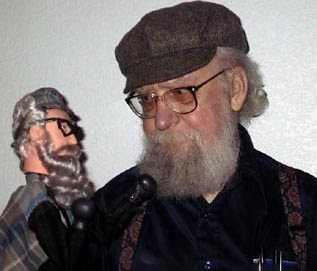 "One of the great rewards of a writer's life is that it lets you read all the books you want to without feeling guilty."
Advertisement:

Damon Francis Knight (September 19, 1922 – April 15, 2002) was an American author, editor and professional critic of Speculative Fiction, and a founding member of the Science Fiction Writers of America and the Clarion Writers Workshop. He wrote many novels and short-stories, including the famous story "To Serve Man", which is the basis for our trope, To Serve Man. He is also credited with popularizing the term "Idiot Plot".

In 2002, SFWA renamed their Grand Master award in his honor, calling it the Damon Knight Memorial Grand Master Award. Knight himself had won the award in 1995.