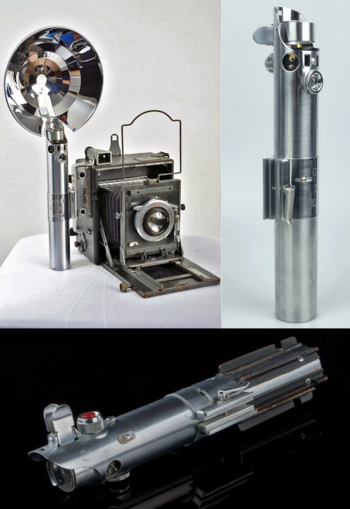 An act of desperation by a cash- or time-strapped effects team in the days before digital imaging became affordable and subsequently took over Special Effects. Instead of incurring the time or expense of building their own miniatures, they instead take a shortcut by purchasing off-the-shelf toys or model kits. Depending on the quality of their manufacture (and, in the case of models, assembly), the results can range from surprisingly effective, to sub-par, to obvious Special Effects Failure. Alternately, the effects team might modify ordinary household items into whatever Props they need.

Do note that the use of off-the-shelf models are very common for miniature work. Most model kits are often already of very high quality and can be pulled off convincingly, particularly in the use of "greebling" (the details themselves are "greebles", as coined by George Lucas in the production of A New Hope). This is when one takes parts from a model kit, already being of great quality and put it on as detail for bigger models. A great example are the star destroyers in Star Wars, which were essentially plywood models dressed with loads of parts from mixed and matched kits to create what looked like extremely realistic and detailed ships.

Occasionally if the story allows for it, it might end up playing what it really is. For example, commercially available model vehicles being used to portray their real-life counterparts, or licensed merchandising items being used as props or for model shots on the actual show they came from.

This trope comes in two flavors:

See also Prop Recycling, Special Effect Failure and No Budget. Sister Trope to Slurpasaur (where a live animal represents a much-larger monster). Compare with GIS Syndrome where cut-and-paste stock photos and backgrounds are used with little or no modification. See Practical Effects for when the budget is a little better.

In recent years a subreddit

has developed dedicated to spotting listing these cases, named after the instance from V for Vendetta listed below.

Examples of Straight Out of the Box props