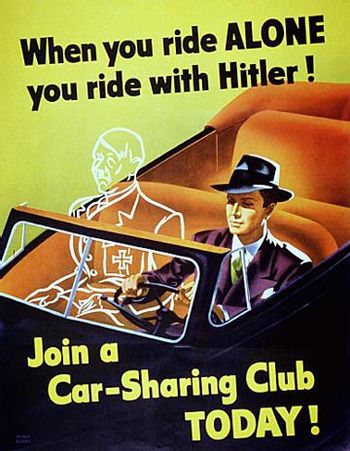 Commercials put on by the government for public safety or information. Also known as Government Information Adverts or Public Information Films.

These commercials usually try to get you to stop smoking, obey the speed limit, look when crossing the road, or submit your tax return on time. Anvilicious by nature. Since they deal with serious (and not so serious) real-life problems, and often have limited budgets, the potential for Narm is very high, but when done right, PSAs can be quite effective.

Now You Know. And Knowing Is Half the Battle.

is responsible for many such messages on American television. Some of the UK Road Safety ads (which are also shown in cinemas before the feature) are quite disturbing, as are the anti-smoking ads in the United States. They are sometimes known to prey on Mortality Phobia or Primal Fear in order to Scare 'Em Straight.

Those shown during children's cartoons are often either educational or traumatizing. All varieties are susceptible to Détournement.

A subtrope is the kind put on by networks themselves, just to say: We Care. Compare Advertising Disguised as News for when companies use trusted media for less-than-pure purposes. It can also be seen as a benign variant of the Propaganda Piece.

PSAs may sometimes seem to deliver a Captain Obvious Aesop, but it's good to remember that the aesop may not be obvious to everyone. On the other hand, if the PSA lacks sufficient self-awareness, it may fall victim to the unintended message, "Do Not Do This Cool Thing."

Subverted by the Stealth Cigarette Commercial, when companies that have a vested interest are legally required to make PSAs against their own harmful products. For some reason, they don't seem to mind that very much...