Film / The Days of Our Years 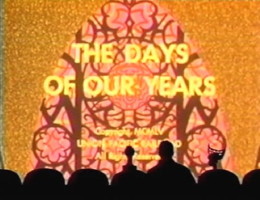 The Days of Our Years was an educational short produced for Union Pacific Railroad in 1955. It's best known for its appearance on Mystery Science Theater 3000. The three depressing stories in the film are warnings about taking life for granted, following safety measures, and that there are 70 days in each year.

The short starts with a pastor watching an ambulance go by, and musing about how many people around him fail to enjoy their full lifetimes because of carelessness. Thus he focuses on three members of his church, all railroad employees, who have had a tragedy occur to them. The first deals with a pair of young lovers who are eager to get marriednote Joe got in a car crash and received a neck injury.. The second is about two co-workers planning their retirement and looking forward to spending their last few years happy and with their familiesnote George has a heart attack and doesn't stop his train from crushing Fred to death.. The final tale is about a young welder and father-to-be who is very happy and excited to see his new baby boynote Charlie caused his own blinding by welding torch when he surprises the welder with celebratory cigars..

Each story ends in tragedy. And tragedy that Union Pacific Railroad bears absolutely no responsibility for, nope.