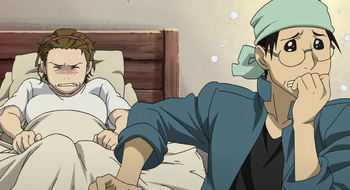 "My goodness! My gracious!
When will this day be done?
Will it be a girl
Or will I have a son?"
— Dexter's Dad, Dexter's Laboratory
Advertisement:

When the Delivery Guy is the father of the baby, and has been preparing for this for the last nine months, he's often every bit as badly prepared when the time comes as some random guy would be, and usually a lot less calm. Sometimes he's over-prepared, so that he's still reading his checklist while his wife is having a Screaming Birth, sometimes his mind just goes blank at the thought he's going to be a father. On being told by his partner that the baby is coming, he will often charge off immediately to the hospital only to return a few seconds later to collect said pregnant partner. (It's a comedy trope.) When they finally get to the hospital, expect the wife to have to push said husband in to the building in the wheelchair, instead of the other way around, since by this point he's likely fainted, hit his head, or possibly fallen downstairs in a panic.

A fairly modern trope, as older works generally assume that the father will have as little as possible to do with the birth—possibly because if he was there, he'd only be flapping around like a headless chicken. In fact, in olden times, it was strongly frowned upon for men to be present when their wives (or female partners) are in labor, and pretty much anything with pregnancy and childbirth was left largely to the women in society. Until doctors (who were mostly men in olden times) started becoming more involved with pregnancy and childbirth, much of that was handled by midwives (who, even in modern times, are predominantly women). Having a doctor present would probably be the one exception to the general "no men allowed" mentality of the childbirth process—and even then, a doctor would usually only be present in the case of an emergency.

In the United States, it actually wasn't until around the 1970s that it was considered "okay" for men (including the pregnant woman's male partner) to be present during the time a woman was in labor; men, with the exception of medical professionals, were basically all but flat-out banned from most delivery rooms.

Frequently, a father may be given something ostensibly helpful to do by someone more competent, with boiling water and finding clean sheets being fairly common tasks (which may actually be useful). Or, if he's been kept out for whatever reason, he's shown pacing outside the delivery room (quite possibly wearing a groove into the floor); in older stories, he may well be smoking like a chimney — an increasing number of cigarette stubs may be a way to indicate the progress without having to actually show the woman in labor. In either traditional or modern childbirth scenes, once the baby is born, expect various celebratory traditions, including handing out cigars and/or buying A Round of Drinks for the House.

Sam's generally not so good at handling things he can't control, which seems to be why, even as Commander, he does a lot of hands-on police work.

However, Simon is somewhat nervous as he helps deliver the baby, but then he says that it's the first time he's done so and handles it about as well as he can. Inara helps him and says she's never done that either. River says that it's her first time too.