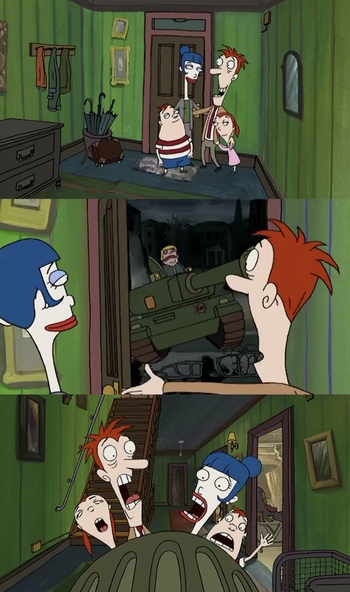 "Rest in pieces!"
"It's not ironic, it's just mean!"
— Bender, Futurama
Advertisement:

A Twist Ending that serves no purpose other than to be excessively cruel.

The Cruel Twist Ending is basically the Evil Counterpart of the Karmic Twist Ending: in the latter, the twist is a form of divine justice, a bad thing happening to stop a bad person from getting away with it (or a good thing happening to someone who deserves it). In the former, it's just Finagle's Law: the universe is a mean place and wants to hurt you. Often, a Cruel Twist Ending is what happens when a writer attempts a Karmic Twist Ending, but fails to carry it off. It can be used for cruel irony and very dark humour but has to be undeserved and unsatisfying in order to be different from the karmic one.

Most common in genre anthologies with a darker tone such as The Twilight Zone: Tales of the Unexpected, Tales from the Darkside, Monsters, The Outer Limits (1995) (so often, in fact, that "Outer Limits Twist" was the previous trope name), etc.

Lighter-weight versions come up very often in shows where Failure Is the Only Option, especially when the show has run for a long time, and the writers need to contrive more and more extravagant reasons why the protagonists can't win. It can also be used as a shock subversion of a stereotypical happy ending. If it's overused, it becomes a Mandatory Twist Ending. If the ending makes you wonder what the point of the story was, it can come across as a Shoot the Shaggy Dog. A particularly dark version can lead to Too Bleak, Stopped Caring. The Diabolus ex Machina also often gets involved. And Then John Was a Zombie is often an example. Compare Not Quite Saved Enough and Sudden Downer Ending. May causes Ending Aversion if it's handed poorly.

An episode of The Grim Adventures of Billy and Mandy ends rather horrifically with the villain Nergal turning people into his "friends".

An episode of The Grim Adventures of Billy and Mandy ends rather horrifically with the villain Nergal turning people into his "friends".