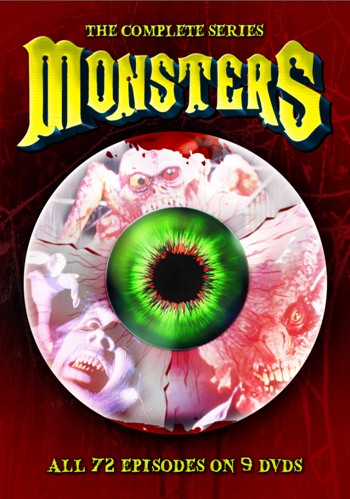 A horror anthology show in a similar vein to Tales from the Darkside, it shared the same producer (Richard P. Rubenstein), and in some ways succeeded the show (which had ended the same year in which Monsters began). It differed in some respects nonetheless. While Tales sometimes dabbled in stories of science fiction and fantasy, this series was more strictly horror. As the name implies, each episode of Monsters (with very few exceptions) featured a different monster, from the animatronic puppet of a fictional children's television program to mutated, weapon-wielding lab rats.

Similar to Tales, however, the stories in Monsters were rarely very straightforward action plots and often contained some ironic twist in which a character's conceit or Greed would do him in, often with gruesome results. Adding to this was a sense of comedy often lost on horror productions, which might in some instances lighten the audience's mood (often deceptively) but in many cases added to the overall eeriness of the production.

The Title Sequence of the show is a cheesy-yet-perversely surreal take on a Sitcom intro, which begins with a seemingly innocuous family discussing what to watch on television. They are revealed to be hideous humanoid creatures with Extra Eyes and elongated, deformed faces who snack on candied insects, yet they are all live and dress in a typical Eighties suburban setting.

The show was also known to have had celebrity guests before they became famous, including Steve Buscemi, Lili Taylor, Matt LeBlanc, David Spade, Gina Gershon and Richard Belzer.

Not to be confused with the manga and anime series Monster, the 2003 film Monster, or the 2010 film Monsters.