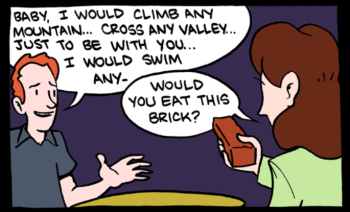 "Of course I would, it would cement my love for you."
"I would walk across the desert with no shoes upon my feet,
To share with you the last bite of bread I had to eat."
— The Judds, "Love Can Build a Bridge"
Advertisement:

Some lovers say that they'll care for you, work hard to support you, and be there for you when you need a shoulder to cry on. But why stop there? Why not fetch the stars from the sky for you, climb the highest mountain, walk a thousand miles on broken glass just for one touch of your hand! And yes, these things are completely impractical and nobody could actually do any of them without dying - but hey, sometimes the best way to express powerful feelings is through ridiculous exaggeration. Alternatively, you can interpret such impractical feats as metaphors for overcoming more mundane obstacles.

Other forms of hyperbole are also eligible, such as attributing supernatural properties or abilities to your lover that no person actually has, like shining/glowing, being the source of all beauty, or teaching the doves to sing.

If any "I would such and such" statements turn out to be Not Hyperbole, back away slowly because Love Makes You Crazy and/or evil.

Straight example with the mountain, as there are certainly mountains high enough to be impassable. The valley gets a little weird, but if you expand your definition of "valley" to include gorges and canyons it still makes some kind of sense. But river? Really? Even the widest of rivers can be crossed by ferry.