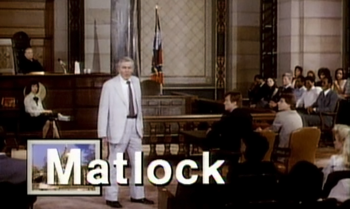 A long-running Courtroom Drama about elderly Southern defense attorney Ben Matlock, played by Andy Griffith. Both a series that ran for many years and a short series of Made for TV Movies.
Advertisement:

Benjamin Leighton Matlock is a folksy Southerner with a moral code from before The '60s and a sense of justice. (One episode has him reveal that he grew up in a North Carolina town that no longer exists.) He currently practices law in Atlanta, Georgia, which, at the time this series was running, was one of the least Southern places in the Deep South. He defends his clients with help from a private detective friend, Courtroom Antics (done folksily), and finding out who actually did it. (In one movie, Matlock actually kept the case going until he found out who did the murder, even though his client was actually cleared and the prosecutor was ready to drop the case.)

Structurally, this series is very much like Perry Mason. Probably not coincidentally, Matlock's creator, Dean Hargrove, and his production partner, Fred Silverman (the same man who, at various times, worked as an executive for all three major television networks ABC, CBS, and NBC) produced a string of Perry Mason made-for-TV movies beginning three months before Matlock premiered. But there is a big difference between Mason and Matlock. Perry Mason (based in Los Angeles in most of the franchise; based in Denver for the TV movies) is always intense and menacing by nature; Matlock is old-fashioned, folksy and grandfatherly.

Matlock is one of many shows from The '80s with geriatric protagonists; unlike several of the others (such as The Golden Girls and Murder, She Wrote) it never developed a Periphery Demographic of younger viewers, and indeed is mostly remembered (thanks in large part to the efforts of The Simpsons) as a show beloved by the elderly. Ironically, it never aired on the "old folks' network", CBS.

A 2-part episode from the first season featured a character that would be reworked into one of the lead characters of the CBS series Jake and the Fatman, which in turn spun off Diagnosis: Murder. Through crossovers on the latter series (including an appearance by Ben Matlock) these three shows also share a universe with the Mission: Impossible franchise, Mannix, and Promised Land along with that show's parent series Touched by an Angel. All of this content is currently owned by Paramount Global, though the TV shows and the M:I films were cast under separate ownership from 2006-19 (the whole shared universe first came under common ownership in 2000).