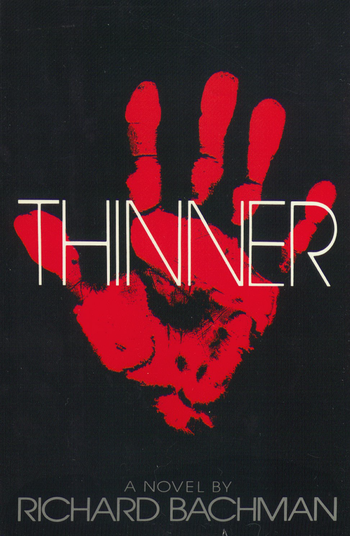 "When your wife and kids get killed in a plane crash, you don't want to listen to how circuit A fucked up switch B, and traffic controller C had a touch of bug D and navigator E picked the wrong time to go to shithouse F. You just want to sue the shit out of the airline … or kill someone with your shotgun. You want a goat, Halleck. You want to hurt someone. And we're getting hurt. Bad for us. Good for him."
— Sheriff Duncan Hopley, on revenge.
Advertisement:

Thinner is a 1984 novel by Stephen King, published under his Richard Bachman pseudonym.

Obese lawyer Billy Halleck, charged with vehicular manslaughter after killing an old Romani woman, is acquitted thanks to his connection with the judge. As he leaves the courthouse, the 106-year-old father of the woman places a curse on him that causes him to rapidly lose weight. After learning that the Romani placed a curse on the judge (making him grow hideous scales on his face) and his other friend, a cop that lied on the stand to aid him (leaving his face pockmarked with huge zits), Halleck enlists the help of a former client and mob boss to terrorize the Romani to lift his curse.

Adapted into a 1996 movie, with Robert John Burke as Halleck, Joe Mantegna as the mob boss, and Kari Wührer as a Romani (the ancient one's great-granddaughter, to be precise).