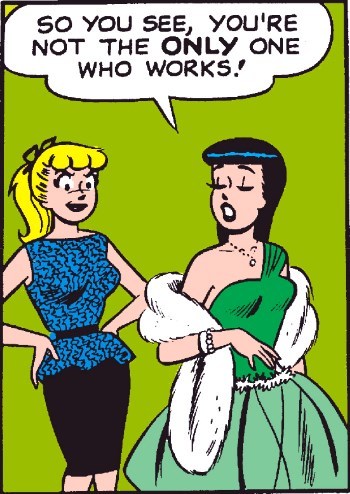 Veronica Lodge is not only spoiled, she's also in denial about it.
Drew: Look, sometimes we have to do things we don't want to do because they're good for us.
Angelica: Not me, Daddy. I'm special.
— Rugrats
Advertisement:

You know the old saying "Spare the rod, spoil the child"? Yeah, pretty much this trope in a nutshell.

Some kids can get whatever they want by screaming at their parents until they give in. "I want a pony" is one common demand of these types, as is any rude demand for food. These kids do not like being told "no", or any other words to the effect of denying them what they want, and will often fly into a tantrum if so denied.

Usually, but not always, female — and may grow up to be an Alpha Bitch or a Rich Bitch. Indeed, the grown-up version may still be referred to as a spoiled brat if they still rely on their parents' money and influence. Never Nice to the Waiter and prone to Never My Fault.

If the spoiled brat has a sibling, Parental Favoritism most likely would have played a role in shaping the brat's attitude.

While the parents are usually depicted as the fault of their child's behaviour, it's not always their fault, as the brat is usually spoiled by enablement and a lack of consequences for their actions. It can be anyone; a cowardly teacher who lacks discipline, a naive authority figure, or someone that had put the brat on a pedestal and just never said "no" to them. They can be spoiled by the media when it gives them too much attention and praise, causing the child to believe that they can do no wrong and nobody can stop them if they get out of hand.

On the other hand, since Children Are Innocent, the cause may be their parents' treatment of them, whether neglect or being a too-Doting Parent. (To be fair, if the parents put their collective feet down, the child would have to change.) Removing them to more natural circumstances may cure them entirely, unlike adults of similar personality. Many a Magical Nanny specializes in it. This is especially likely if the parents lavish material goods on them in place of affection or attention; any Parental Substitute may bring the child back to good manners by providing attention and discipline, and often wins the heart of the child that way, to the shock of parents, who may complain, "But we give him everything." The older the child is, the less likely this is to happen. In extreme cases, this may result in an All Take and No Give relationship with their parents.

This often leaves the kid Rich in Dollars, Poor in Sense.

A Super-Trope to Royal Brat (where the brat is part of a powerful family).

Greed and Pride are the chief sins of this character type, though not a few are also Envious as well.

In older works, the Brat may get their comeuppance in the form of a Comedic Spanking — which as in the old saying is believed to be the opposite of "spoil the child" — but this is subject to Values Dissonance these days as corporal punishment for children is considered less acceptable. Either way, if there's any Character Development, it will probably involve Break the Haughty or Pride Before a Fall.

Compare with Egocentrically Religious, who has this attitude towards God and the universe rather than towards father and the local community. Also compare with Idle Rich. Contrast Non-Idle Rich, Spoiled Sweet, and Lonely Rich Kid.

Dudley is spoiled rotten by his mother and father.

Dudley is spoiled rotten by his mother and father.