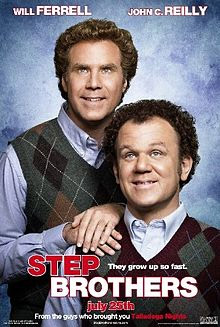 Step Brothers is a 2008 movie directed by Adam McKay, produced by Judd Apatow and starring Will Ferrell and John C. Reilly (who both wrote the script with McKay), where two slacker adult children, Dale Doback (Reilly) and Brennan Huff (Ferrell), are forced to live with each other when their parents get married, after a Freudian Slip by Dr. Robert Doback (Richard Jenkins). Hilarity Ensues as they become best friends after suffering from hilarious hijinks, committing beautiful singing and rightful child abuse (they deserve it in context).