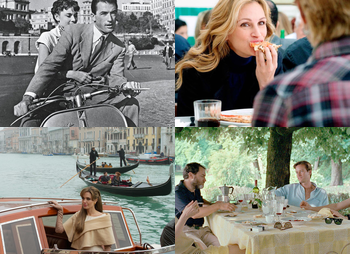 Clockwise from top left: a vespa ride through Rome, eating pizza in Naples, enjoying the warm countryside, and a boat ride through Venice.
With the lanterns glowing
And the vino flowing
And the good strong smell of mozzarella in the air!
I like a great big Italian Sposalizio,
Lay it out and count me in!
I'm the kind of fella
Likes a tarantella
To the fine, fine music of a mellow mandolin!
— The Most Happy Fella, "Sposalizio"
Advertisement:

Italy, mostly known for its food and the fat mustachioed guys who prepare it. There are only two cities in Italy, Rome and Venice (maybe three with Florence in more recent works). Neither city seems to contain a single building constructed after the 17th century. Rome is heavily populated by gourmet chefs, effete fashionistas, and handsome, Vespa-riding homewreckers all too eager to give young female tourists a romantic ride past the Trevi Fountain — oh, and most famous landmarks are within five minutes of each other, too. The Leaning Tower of Pisa is usually found here as well, as opposed to, you know, in Pisa.

Venice, meanwhile, is chock full of handsome, gondola-riding homewreckers all too eager to give young female tourists a romantic ride under the Bridge of Sighs. Either way, men: if your wife or girlfriend steals away on one of these intimate little tours, you're probably flying back home by yourself. Sorry you had to hear it from us.

Apparently, Tuscany (which is where Pisa is actually located) has swallowed up the rest of the country, as all the surrounding countryside consists of tomato farms, olive groves, and vineyards. If anybody's got any kind of sound system, expect to hear it blasting either "Funiculì, Funiculà"note Also known as the well-memed Pizza Theme from Spider-Man 2., "O Sole Mio", "Santa Lucia" (all Neapolitan songs), or some famous Giuseppe Verdi aria.note "Santa Lucia"/"Stella del Mare" has been exported to Lutheran Sweden as a popular Christmas carol with a text full of references to snow, winter darkness, and the arrival of the Queen of Lights. Few Swedes actually know of its origins and get puzzled when they hear it in Naples, like in the old Tom and Jerry cartoon when the protagonists step off a cruise ship there. At the same time, the population of Venice, Rome and Tuscany consists entirely of Sicilians and Neapolitans.

There's also a dark side to this idyllic country: the time-warped post-war black-and-white Italy that somehow survived till today, directly from neo-realistic movies. It's a dangerous and inhospitable country mostly populated of black clad old women that speak quietly and make emphatic gestures, act as superstitious yet religious fanatics, and still don't own a TV set or a vehicle. The only intelligible words these creatures seem to be able to communicate is some distorted provincial dialect like "goombah", and they still claim to vote for Mussolini (Which you technically still can, in the form of his granddaughter.

). The remaining population of dark Italy is composed of dark skinned and dark-haired (almost Indian looking) scoundrels, good-for-nothings or whores.

In a twist of supreme irony, the whole American continent was discovered by an Italian sailing under the flag of Spain. Rather than coming from Rome or Venice, said Italian, Cristoforo Colombo, came from Genoa, the maritime merchant republic in northwest Italy which destroyed the Pisans (yes, them of the leaning tower) and scared the Venetians shitless in several naval battles. (Back in the day when they went around in heavily armed galleys rather than gondolas, defeating Venetians was an achievement to be proud of, like sinking the U.S. Navy.) Contrary to the more popular Italian tropes, Genoese are famed to be a surly bunch of seldom-smiling, understated, humorless fellows, disdaining songs and dances and preferring pesto to tomato on their pasta; they also have an unjustified reputation of being stingy, similar to stereotypes of Scots and Jews.

Following a rather lacklustre performance in World War II, the Italian armed forces are popularly regarded as a bunch of Chianti drinking surrender monkeys, even if their previous and later performances were never as bad as that one.

See here for info on the real country. See Toros y Flamenco and Ruritania for the Hollywood versions of the rest of Southern Europe.

open/close all folders
Anime & Manga
Anpanman has a character named Naporitanroll-chan, who specializes in making naporitan rolls (a Japanese dish based on spaghetti, but uses ketchup as the sauce and is placed inside a bun). She also rides a gondola and sings her own rendition of "Funiculi, Funicula".
Fan Works
Films — Live-Action
Literature
Live-Action TV
Music
Pro Wrestling
Theatre
Video Games
Western Animation