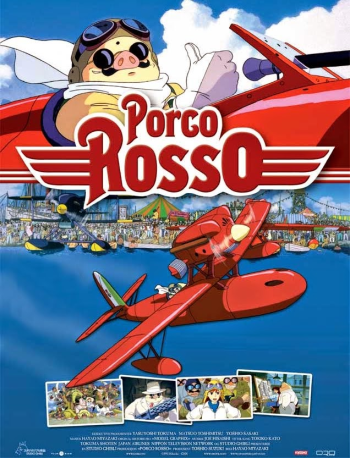 Hayao Miyazaki's homage to the early days of aviation and cinema, Porco Rosso (Kurenai no Buta / 紅の豚,1992) tells the story of a renowned Italian fighter pilot, a veteran of the First World War who has been mysteriously transformed into a pig. During The Roaring '20s, Porco Rosso (Shūichirō Moriyama), the 'Red Pig', makes his living as a mercenary, flying a crimson seaplane and doing battle with pirates. Things really start to get interesting for Porco when the pirates, tired of having their butts handed to them by a pig, hire Donald Curtis (Akio Ōtsuka), a famed American aviator, to take him down. Pursued by the Fascist military he deserted years ago, Porco gains a teenage sidekick, Fio Piccolo (Akemi Okamura), and takes the fight to the pirates. What follows is an epic journey of self-discovery and general badassery in the great Ghibli tradition. It's got all the hallmarks of a Miyazaki movie; strong women, flying machines, air-pirates and an undertone of the supernatural.
Advertisement:

Miyazaki had expressed interest in making a sequel. He planned to set it in the Spanish Civil War, and Porco would have been older. However, nothing has come out of it.