Film / A Matter of Life and Death 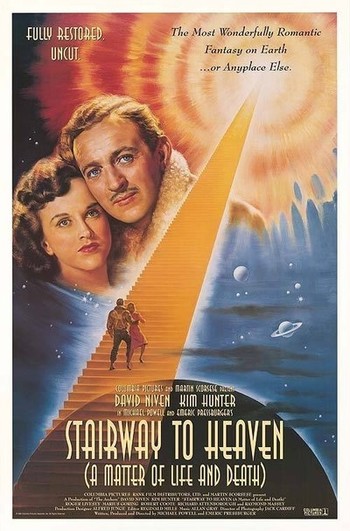 "This is the universe. Big, isn't it?"
—Opening Narration
Advertisement:

A Matter of Life and Death (1946) is a romantic fantasy film set in World War II by the British writer-director-producer team of Michael Powell and Emeric Pressburger, starring David Niven. It was originally commissioned as one of the last films funded by the Ministry of Information with the intention of serving as an entertaining comedy about some of the baggage concerning Anglo-American relationship but as always Powell and Pressburger drew from wider references. The main plot was inspired by a real-life incident of a British pilot who survived a plane crash, in addition to which they drew on Hungarian author Frigyes Karinthy's A Journey Round My Skull which described the author's experience with brain tumor and the vivid hallucinations it produced. He described having vivid visions in his coma concerning the afterlife and the film mixes fantasy with medically accurate descriptions of partial epileptic seizures.

Peter D. Carter (David Niven) is a British RAF pilot whose plane is about to crash. Just as it is about to crash, he gives a dying message to the American radio operator June (Kim Hunter), having a final painful conversation where they miraculously fall in love despite not meeting each other. Carter survives the crash but all is not well. In the Afterlife, a council notes that Carter has essentially cheated death and they send Conductor 71 (Marius Goring), an aristocrat who lost his head during the Reign of Terror to bring him to the Afterlife. However, Peter by this time has met June after crashing on the beach, and they begin a relationship which Peter argues makes him an exception to the laws of the universe. A tussle between Life and Afterlife ensues, as Peter's friends on earth and his supporters in the afterlife battle for the rights of his soul.

It was released in the United States under the title Stairway to Heavennote  which Michael Powell hated and felt was against the secular aspect of the film , which was derived from the film's most prominent special effect: a broad escalator linking the Other World and Earth. Reversing the convention of The Wizard of Oz, the supernatural scenes are in black and white, while the ones on Earth are in Technicolor, with the metaphor of Life/Reality=Colour, and Death/Fantasy=Black and White a reversal of the former film.

In 2004, A Matter of Life and Death was named the second greatest British film ever made by the magazine Total Film in a poll of 25 film critics, behind only Get Carter.