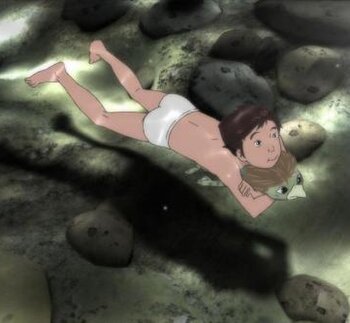 Lincoln: Anyone got any extra swimsuits we can borrow?
Artie: Nah, but we’re all dudes here. Just go in your skivvies.
— The Loud House, "Pasture Bedtime"
Advertisement:

A character wants to go for a swim, but for some reason doesn't have a swimsuit with them (maybe they forgot, the idea to go swimming was made up on the fly, or they don't even have one at all). They also don't feel like Skinny Dipping. The solution; just have them use their underwear as an alternative.

A character can also be forced to resort to this if they suddenly find themselves in need to go into water, like when they have to rescue someone or to get out of danger, and swimming fully clothed would be impractical or even dangerous. There are also cultures where their bathing suit or swimsuit would basically be the same thing (e.g. Fundoshi).

Of course, the downside of this is that the character has to wait for their underwear to dry up afterwards before they can dress up again, but it's better than nothing. There are also some other problems that can arise from this; first, unlike swimsuits, underwear was not exactly designed for the purpose of swimming. Also, although they cover up the exact same parts of the body, so there's no difference in what other people can and can't see, wearing just underwear is still considered somewhat of a taboo (especially for female characters) while swimsuits are perfectly acceptable. As such, it can lead to an embarrassing situation if the character is caught swimming by someone they'd rather not be seen by while wearing just their underwear, even if they wouldn't feel embarrassed if that same person saw them swim wearing a swimsuit. In particular if the underwear in question is of the Goofy Print kind.