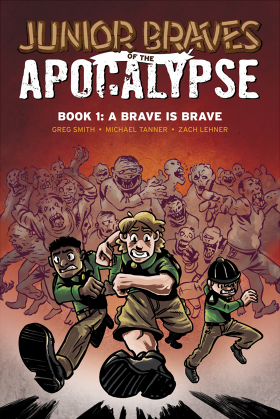 Junior Braves of the Apocalypse is a young adult graphic novel written by Michael Tanner and Greg Smith, illustrated by Zach Lehner, and published by Oni Press.

Returning home from a week-long camping trip, the Junior Braves of Tribe 65 find that the world has descended into chaos while they were away. Their town is in ruins, their friends and neighbors have turned into shambling bloodthirsty mutants, and many of the survivors have downright sinister intentions.

Forced to band together against a world that wants to kill them, the boys have to rely on teamwork and wilderness survival skills to stay alive as they travel to Seattle in search of their families.

This graphic novel contains examples of...