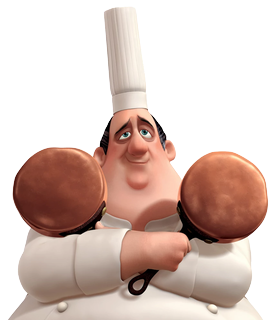 This is when a character that is involved with preparing food in some way, such as a cook or restaurant owner, is shown to be fatter than other characters. Despite their association with food, this character is rarely shown to be a Big Eater, and very well might not be one, but their size gives the impression that they are one. Expect plenty of overlap with Big Fun, with the Chubby Chef often being a jovial and friendly fellow who takes great pride in feeding their guests, but not always.

The trope may have originated from the known fact that in order to be a good chef, you must keep tasting your food to make sure it's going well as well as the obvious cooking of food often for practice (moreover, fancy cuisine involves cream sauces, garlic butter, etc). This usually implies subsequently eating said food, which is what gave rise to the old saying that is this trope's quote. This character is often a Supreme Chef, the Team Chef, or both.

This trope covers everything from haute cuisine gourmet chefs to Burger Fool fry cooks; in the latter case, it might overlap with Service Sector Stereotypes.