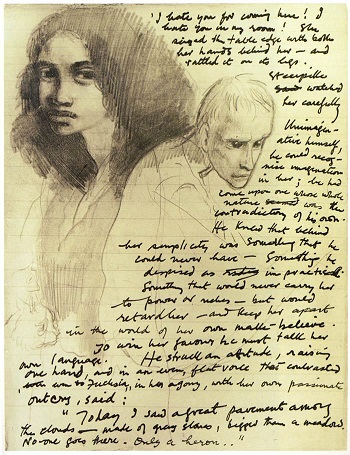 Fuchsia and Steerpike, as depicted by their creator.
Gormenghast, that is, the main massing of the original stone, taken by itself would have displayed a certain ponderous architectural quality were it possible to have ignored the circumfusion of those mean dwellings that swarmed like an epidemic around its outer walls.
— Opening lines, Titus Groan
Advertisement:

The Gormenghast trilogy by Mervyn Peake are three fantasy novels which take place in a Constructed World notable for eschewing the supernatural and the menagerie of beings associated with Lewis Carroll and J. R. R. Tolkien. The novels revolve around a series of grotesque and idiosyncratic characters who live inside a huge castle with surrounding huts which appears to be cut off from the rest of the world.

Although often called the "Gormenghast Trilogy", it is important to note this is a publisher's and critic's convention and not intended by the author. Only the first two novels constitute a single two-part story; he intended Titus Groan to be the central hook of the series and not Castle Gormenghast as it has come to be understood by critics. Sadly Peake's rapidly-evolving Parkinson disease prevented this goal from being realized; the fourth novel would have been entitled Titus Awakes, the first few pages of which Peake wrote while he was still physically capable of doing so, along with a list of events which would have taken place in the following volumes. The fragment was made into the basis of a book by Peake's widow and published in June 2011, but it only contains a few pages of Peake's actual writing.