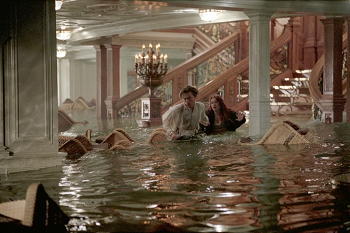 Floods are dramatic events. And while flash floods can drown places in an instant, slowly (or quickly) rising flood waters have a drama of their own.

This trope happens when characters find themselves in a location that is slowly disappearing beneath rising flood waters. Expect the heroes to be in a race against time to retrieve the MacGuffin before it is lost forever beneath the water. In doing so they will face a familiar environment that has suddenly turned hostile, and run the risk of drowning, electrocution (from power cables in the water) and other unexpected forms of death.

Often overlaps with Big Storm Episode. Also with Big Dam Plot if the flood threatens to destroy the local dam. There is an almost 100% chance the cast will end up in Sexy Soaked Shirts.

See also Rise to the Challenge, where rising flood waters are one of the obstacles a character might have to avoid, and Giant Wall of Watery Doom, where the water is a much more abrupt threat. Compare Drowning Pit, where a character is locked in a single room filling with non-flood water.