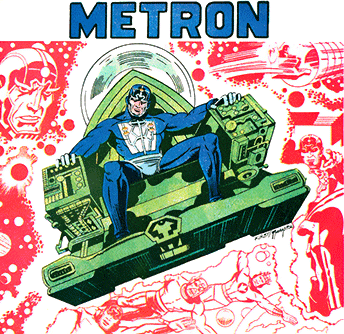 People Sit on Chairs all the time, but this one is awfully cool.

In Ye Olden Times, they called it a throne, and there was usually a King on it. Or a Queen. Or a princess. Or some dude named Orcus. Nowadays, the Corrupt Corporate Executive and Mob Boss use the swiveling chairs behind the desks of their penthouse offices to much the same effect.

More futuristic versions can include buttons on the armrest, which can help The Captain take a memo if there aren't any Bridge Bunnies around. Alternatively, if it belongs to the Big Bad (in black leather, natch), any built-in controls will probably have to do with the tidy disposal of underlings.

Villains and roguish heroes of the barbarian or Middle Eastern persuasion will often be surrounded by scantily-clad women fanning them and feeding them grapes.

Cool Chairs will always be thematically appropriate. You will never find Lord Azazel the Befouler brooding atop his dread throne of plush cushions, and conversely you'll will never see Captain Jake McHero reclining on a seat made of iron spikes and human tibias. In The '60s, the Cool Chair was Eero Aarnio's Ball Chair.

People who have their own Cool Chairs tend to be (understandably) attached to them; should some irreverent interloper put his seat in your seat, feel free to declare: This Is My Chair.

A Sub-Trope of this is the Hovering Cool Chair, often found in video games and more fantastic works of fiction. Hovering Cool Chairs are also sometimes weaponized — machine guns, rockets, and lasers pop out of it to attack the villain's enemies — especially when also functioning as a Super Wheelchair. This may serve as a way to introduce a Boss Battle with a mastermind-type villain without resorting to Authority Equals Asskicking. Swivel-Chair Antics is another sub-trope.

On occasion, the Chair may serve as an escape pod for the villain to make his getaway.

You wish you had a Couch as cool as the one Hank and the Boys have.

You wish you had a Couch as cool as the one Hank and the Boys have.