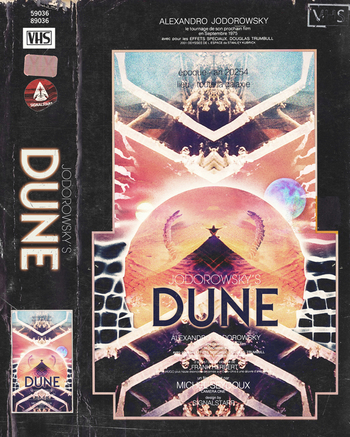 The greatest sci-fi movie that might have been...
"The mind is like a universe; it's constantly expanding."
— Alejandro Jodorowsky
Advertisement:

Jodorowsky's Dune is a 2013 documentary film directed by Frank Pavich. It covers the absolutely insane first attempt to adapt Frank Herbert's Dune in a big screen capacity in the 1970s. While it was not made, the documentary showcases the wide impact of the unmade Epic Movie on Hollywood via the Production Posse that came together to work on it being hired for other productions.

Following the success of El Topo and The Holy Mountain, Alejandro Jodorowsky was given his choice of film project by his eager producer and friend, Michel Seydoux. Jodorowsky wanted to create a film that would expand the minds of the young viewers who watched it, and as such, chose to adapt the highly-influential Dune — despite not having actually read the book at the time. (He listened to a friend talk about the story and made an outline based around that and his vision, and although he later read the book for reference, the story is largely Jodorowsky's own.)

For the next two years, he sought out the means and manpower to make the feature film adaptation a reality. This film would have had a soundtrack by Pink Floyd and Magma. It would have had character designs by the then up-and-coming Moebius and H. R. Giger. It would have had an All-Star Cast consisting of (but not limited to) David Carradine, Orson Welles, Salvador Dalí, and Mick Jagger. It would have been at least 14 hours long... That is, if it hadn't fallen through when Jodorowsky attempted to find a studio that would fund such a ludicrous mammoth of a production.